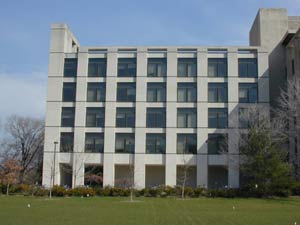 The Donald Jacobs Center, named in 2001 for the longtime dean of the Kellogg School of Management, consists of Arthur Andersen Hall and Leverone Hall. Both were built in 1972 as the home of Kellogg, the School of Education and Social Policy, and the economics department. In 2001 a 75,000-square-foot, six-story addition designed by DeStefano and Partners was added to the northeast of Andersen Hall.